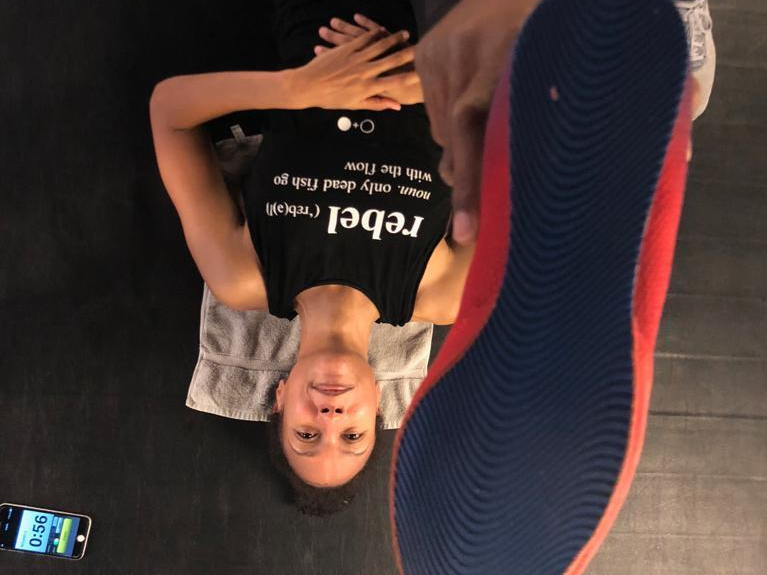 A first fight is similar to losing one’s virginity: it’s going to be uncomfortable and awkward. It will also suck to some extent, depending on where you fall on the spectrum […]”

It’s taken me a more than a fortnight to draw down my first fight and turn it into a post. I started and stopped. Earlier drafts went straight into the trash. A couple days were spent wading through a vat of emotions, thick like stew. I vacillated between writing a romanticized version of what happened vs. the ugly and bittersweet truth.

The problem was lingering on sordid details seemed fractious and petty while taking it too lightly would have been a gross disservice. In the end, I took the time to write something that feels moderately balanced. The plot involves a steep learning-curve, a dose of transformation, and plenty of opportunity for healing.

The long and the short of it is I signed up for a charity fight[1] that was supposed to be similar to the US-based Haymakers. After being matched up with my opponent in July, I returned to NYC where Coach Q had put together a strategy. The intensity of my sessions went through the roof as I worked through a foot injury. Things were fine until they weren’t. At the end of August my opponent hurt herself after falling into a ditch.

We didn’t “officially” find out about the accident until mid-September. The organizer promised she’d find someone to take my opponent’s place, yet, the weeks passed and radio silence grew. At one point, we were presented with a couple of options—none of which sat right with my trainer. Because of the ongoing fiasco and some personal drama we agreed to pull out from the event at the end of the month. There was too much going on for a “first fight” that’s supposed to be a bridge to the amateur world.

Four days after sending that message (approx. three weeks before the event) we received a message that a Canadian stationed temporarily in Brussels had rocked up to the organizer’s club, actively looking for a fight. The newbie claimed to have never fought before and had less than five months of boxing experience under her belt.[2] The organizer threw us together on the card. It didn’t feel right but we said “yes” anyhow.

From that point forward I let Q handle logistics as I went into the zone and prepped to share the ring with a woman I was informed, through the grapevine, talked a lot of smack. Quite impressive for someone who’d just started boxing. So, there we were: Hubris vs. assiduity.

Fast forwarding past the extraneous absurdities (e.g. being told 48 hours prior there would be no judges and, in the spirit of the charity, all bouts would be called draws), on the day of the event the referee made it clear he’d stop any fight (read: hand out a DQ) should one boxer go too hard. The last minute warning came off as irreverent. How do you get in the ring when you suspect your opponent won’t abide by the (new) rules? How does one come to terms with crossing an ocean for a few rounds of sparring?

What transpired after I stepped through the ropes was a blur. I only remember a few things sharply, such as standing with Coach in the corner between rounds, laughing. Or pivoting and finding space after getting nailed with a wind-sucking body shot. Or returning the favour with a lovely uppercut-hook hybrid—the punch delivered with enough chutzpah my opponent lowered her guard and spit out the word “bitch“ before audibly complaining to the referee that I’d hit her too hard.

My memory picks up again after the last bell, which is when I looked at Coach and smiled. I’d fought and survived! In fact, I’d done pretty well. In this universe, however, the referee lifted two arms in the air to signal a draw. As I moved away, the Master of Ceremony interjected and grandstanded into the mic. “There is a winner!” he said. The referee reached for my hand and held it down while raising my opponent’s.

The declaration made no sense since there were no judges. The fight was not sanctioned. Also, out of 10 bouts all were draws except for two: mine and the one involving the organizer’s husband. The ridiculousness of the ending put a rancid icing on the lopsided confection that was supposed to be called a cake. The fight that wasn’t a fight actually turned out to be a fight.

And it ended in a rather flaccid fashion.

At first, I was scorched by anger. But as time passed the burn lessened, and something beautiful happened. My feelings shifted. Disappointment faded and gratitude replaced rage. I understood how little those six minutes mattered compared to the months I put into the endeavour, refining multiple skill sets.

It’s why I made the comparison, amusingly, to a couple friends a few weeks back that a first fight is similar to losing one’s virginity: It’s bound to be uncomfortable and awkward. It will suck to some extent, depending on where you fall on the spectrum. And although a handful will brag about their textbook-Hollywood-ending-I-saw-God experiences—most won’t be so lucky.

Because “perfect firsts” tend to be the exception and not the rule.

My friend and boxing muse, @ticktackt23, was one of several people who helped prepare me for the highs and lows surrounding fight night. She forecasted I’d remember little of the three rounds at all. And, what do you know! She was correct. Trying to recall anything at the point of (anti) climax is like reaching for something only the body remembers. What came before and after is clear as glass. The stuff in the middle is complex and abstract.

This is a reminder our firsts don’t have to be our lasts. What we learn in the periphery often holds more value than anything else. It’s why I embrace the memories that surface—most have nothing to do with a “first” of any kind. Some days, I’m hit by random flashes like moving around the ring with my sparring sisters from across NYC at all hours of the day. I have so much gratitude for the gaggle of women who helped me rock my learning curve.

Other days the recollections centre on amusing anecdotes with gym-mates, or the surprise training session alongside the women’s reigning world champ in the lightweight division, or the raucous occurrences that have nothing to do boxing or sports. There’s also the slew of intensely intimate and priceless moments involving my coach-turned-friend. All are unexpected, ordinary and mundane happenings that allowed me to hit new levels in various relationships.

It’s healthy to drop expectations. Forget the fanfare. The most profound transformations are housed in silence and spurred by grace. I am okay with being thrilled by the small victories. Unadvertised wins that have nothing to do with an external opponent, referee, or judge. Every time I step through the ropes it’s a goddamned achievement.

Because I enter the ring as one person and come out as somebody else.

To move forward in whatever direction you desire, the past has to become present before you can release it to the wind. Doing so is how I got to meet the person I am today. But this firestorm of a woman could only be found on the other side of a rudimentary six minutes.

Progress depends on the ability to embrace the suck and find ways to  thrive through it.

[2] I know people who are intensely good at social media  stalking. It’s how we learned my opponent had approx. two years of boxing experience at the time of the fight.

[1] Below is a GIF of everyone who donated to Make-a-Wish. Created by the social media savvy @mermaid_urielle.